The black-tailed jackrabbit (Lepus californicus) is found throughout the western United States in the desert, open plains, and foothills. The jackrabbit is actually not a rabbit, but a hare. Hares live in open areas and rely on running in a zigzag pattern to escape their predators. Hares are also precocial, meaning they are born with hair and with their eyes open. They can run and hop shortly after birth. Rabbits, on the other hand, move slower, dig burrows, and scamper into their homes when threatened. Rabbits are altricial, or born hairless, blind, and helpless. The desert cottontail (Sylvilagus audubonii) is the common rabbit of Big Bend.

The black-tailed jackrabbit weighs between four and eight pounds. The female doe is larger than the male buck. Their total length is between 18 and 26 inches. The tail has a black stripe that runs along the top onto the rump (hence the name) and is 2' to 4 1/2' long. The characteristic large ears are 4-7' long and are whitish inside and out except for the black tips. There is a light colored ring around the eye. The iris of their eyes is yellow ochre with black pupils. The eyes are on the sides of the head, which enables jackrabbits to see in front, to the side, and behind them. Their eyes are used more to pick up motion than to focus on an object. The jackrabbit has excellent hearing and sense of smell. Their ears and nose are in constant motion to analyze their environment for sounds and smells.

Hares and rabbits are perhaps nature's ideal prey. Coyotes, mountain lions, bobcats, foxes, hawks, eagles, owls, and snakes will all eat them. The hare's and rabbit's sharp senses, effective camouflage, and fast running speeds are their only protection. The jackrabbit can hop 5'-10' at a time, and up to 20' when panicked. They can achieve speeds of up to 40 mph. When at a moderate run, every four to five leaps are exceptionally high to see their surroundings or predators. The jackrabbit runs with its ears flat and tail between its haunches. It will leap over objects rather than run around them. The fast, erratic leaps, bounds, and sprints are effective against predators, but they have poor endurance and often end up as some animal's dinner.

Black-tailed jackrabbits have several ways to protect themselves from their enemies. They use their excellent sense of hearing to listen for predators. With their long, powerful hind legs, they can make leaps of up to 20 feet and can run up to 45 mph when they are escaping from coyotes, bobcats, and foxes. Hawks, Coyotes and badgers are among the predators that regularly hunt jackrabbits. Habitat Black-tailed Jackrabbits can be found on brushlands, prairies and meadows.

The amazing reproductive rate of hares and rabbits is an adaptation to being preyed upon by so many carnivores. Black-tailed jackrabbits will have up to six litters each year with as many as eight young in each litter, although two to four is more common. After a gestation period of 41-47 days, the female will give birth in a grassy hollow or shallow depression scratched into the ground. There is no nest. Within two weeks the young can forage for themselves, and after one month they are living on their own. By eight months of age they are having their own young.

The black-tailed jackrabbit is a herbivore, eating only vegetation like grasses, mesquite and cacti. To help digest this tough vegetation, the jackrabbit's appendix serves as a pre-digesting chamber to start breaking down these food sources before they reach the stomach. When feeding, the jackrabbit leaves neatly clipped diagonal cuts on plant stalks. They have a double row of upper incisors with small, secondary teeth located directly behind the main incisors. These teeth never stop growing, so the hare must constantly gnaw on vegetation to wear them down. Jackrabbits forage for food early in the mornings and late in the evenings, dozing in the shade during the day in shallow depressions. They deposit their scat wherever they happen to be. Two types of droppings are produced. The first is a soft, moist, mucous-coated sphere. The jackrabbit eats these droppings, as they are high in protein and certain B vitamins that are formed by bacteria in the intestines. After passing through the digestive system again, the waste products are deposited onto the ground as a dry dropping. The scat is composed of fibrous, compacted plant material.

Black-tailed jackrabbits are found throughout Big Bend National Park and are most common below 5000'. They are often nocturnal and can commonly be seen along the roadsides on summer nights.

Jack rabbits are true hares because, unlike the cottontailed rabbits, they do not build nests. The mother simply chooses a place to her liking and the young are born fully furred, with their eyes wide open.

Take a look at the desert cottontail, named after its cottony-ball-shaped tail, and the jack rabbit, a true hare in the video below:

The white-tailed jack is the largest of California's hares. It weighs from 6 to 8 pounds. In winter it is sometimes mistaken for the snowshoe rabbit, because, in the colder parts of its range, individuals turn completely white. The range of the white-tailed jack in California is restricted to the east side of the Sierra Nevada and Cascade ranges from Tulare County north to the Oregon border.

The snowshoe rabbit's range is a long narrow strip from the Oregon border down through the higher elevations of the Klamath, Cascade, and Sierra Nevada ranges as far south as Tuolumne County. There are a few snowshoe rabbits in the Warner Mountains in Modoc County. The snowshoe is seldom seen for it prefers to live in dense fir thickets, and in winter is isolated by deep snow.

Unlike the black-tailed jack, which prefers to live in valleys and flat, open country, the white-tailed jack lives in the hills and mountains. In their summer coat, in areas where the ranges of these two jack rabbits overlap, there may be some confusion as to identity. However the two may be distinguished by the color of the underside of their tails. The tail of the black-tailed jack is brownish underneath; the tail of the white-tailed jack is white.
The snowshoe rabbit is more easily identified as it is the smallest hare. It looks more like a cottontail rabbit. Its ears are shorter than its head, but the underside of its tail is brown, not white like the cottontail.

The black-tailed jack rabbit is 18 to 25 inches long and is colored buff peppered with black above, and white below. The tail has a black stripe above. The ears are long and brown with black tips. The antelope jack is approximately the same size, but colored gray above with the lower sides mostly white. The face, throat and ears are brownish, but there is no black tip on the ears.

The snowshoe rabbit, like the white-tailed jack, also goes through two annual molts. In early winter it turns snow white, except for the tips of its ears, which remain black. Its feet become covered with a mat of long hair, to help it run over the soft snow, thus its name 'snowshoe'. In late spring it molts again to a summer coat of grayish brown.

The snowshoe rabbit and the white-tailed jack may have more than one litter a year. There can be as many as 7 or 8 in a litter, although the average litter is from 2 to 4.
The black-tailed jack is by far the most common and is found all over California except in the mountainous areas at elevations above 12,000 feet. They adapt themselves readily to man's use of the land and thrive even in highly developed areas.
In the more temperate areas of the black-tailed jack's range, breeding may continue the year around. Usually several litters are born each year. Here again there may be as many as 8, but the average litter is from 2 to 4. The mother hides her young when she goes out to feed, and, upon returning, mother and young call to locate each other.

They grow rather rapidly and reach adult size in about 7 or 8 months. Sexual maturity is attained at about the same time, but young females do not breed until early in the year following their birth. Usually, the expectant mother provides no nest for her young.

Hares have many natural enemies. Coyotes, bobcats, foxes, horned owls, hawks and snakes prey on both the young and adults. At higher elevations the marten and fisher also prey on the snowshoe.
Hares are active primarily at night. During the day they lie crouched in a 'form' which they have made by using the same spot in a clump of grass or weeds. With their long ears flattened against their back, they are difficult to see. Frequently on hot summer days, they can be seen resting in the shade of a small bush or even a fence post. When frightened they run with such speed that few dogs can catch them. At the start of the chase their speed is broken by high long leaps.
Hares are strict vegetarians, eating a great variety of herbs and shrubs. In farming areas the black-tailed jack may become a serious pest in young orchards and to other agricultural crops.
It is estimated that nearly 2 million 'jack rabbits' are taken by hunters annually in California. The flesh is excellent eating. In periods of high population, some black-tailed jacks, like other game and non-game species, may become diseased and carry tularemia or be a host to common animal parasites. While this is of minor consequence to humans, care should be used in handling or skinning all animals, as some diseases are transmissible through open cuts or abrasions. Cooking thoroughly eliminates any danger.
Kids might like 'The Tortoise and The Jackrabbit' - Hardcover book comes with a animal - a plush tortoise toy.

DesertUSA Newsletter -- We send articles on hiking, camping and places to explore, as well as animals, wildflower reports, plant information and much more. Sign up below or read more about the DesertUSA newsletter here. (It's Free.) 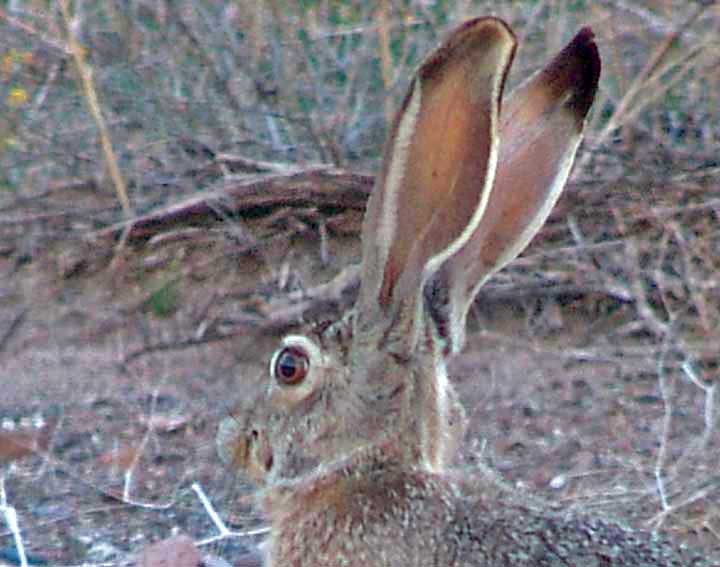