Understanding how valuable slot machine gambling is to casinos doesn’t require any particular expertise. A peek in the front door of any Las Vegas gambling house is all it takes – the size of the space set aside for slots is somewhat proportional to the percentage of a casino’s profits that come from these games.

The same is true in the online gambling industry; a casino website that hosts just three or four variants of a game like roulette could have sixty or a hundred different slot titles to choose from. Whatever the reason, these simple games of chance have become a major source of income for the gambling industry.

How profitable is this type of gambling? Statistics released annually by the British government show that in the year 2012 UK gamblers spent £5 billion on slots alone. Other parts of the world are equally hooked – with some 850,000 slots in the USA, it’s easy to understand how it is that US gamblers can spend more money on slot gambling than on movie tickets, sporting events, and theme parks combined.

The history of slot machines is all about innovation. Today’s high-tech 3D touchscreen video bonus full-immersion slots look and behave less like casino gambling and more like video games. But slots haven’t always been so complex.

The first game that gamblers would recognize as a slot machine was produced in 1899. Invented as an entertainment for frontier saloons, Liberty Bell would be instantly-recognizable to anyone who has ever fed change into a one-armed bandit.

But before Liberty Bell and the subsequent explosion in slot technology, the grandfathers of today’s titles appeared in San Francisco sometime in the 1890s. Those early machines were based on the rules and card values of poker, with symbols identical to numbers and symbols on cards. The design was entirely mechanical, no electricity or computer chips involved, and the games were made up of five reels each of which contained a further ten card symbols. A gambler’s winnings were determined by the value of the hand that appeared on the reels, following standard poker hand hierarchy. 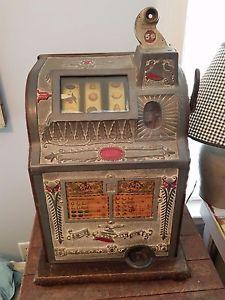 Do the math – a collection of fifty symbols isn’t quite enough to represent a standard card deck; designers left out the ten of spades and the jack of hearts. Why those cards? Without them, a player’s chance of forming a Royal Flush (and winning the game’s highest jackpot) was literally cut in half. Of course, these early games didn’t pay cash, since gambling was illegal – players would exchange their prize tickets for free drinks, tobacco, and other goodies.

In 1899, inventor Charles Fey started producing Liberty Bell games, recognized now as the first slot machines. Liberty Bell had three reels with symbols more familiar to modern gamblers – fruit, playing card icons, and the most valuable symbol, the cracked Liberty Bell. Fey’s game had a built-in coin acceptor, was decorated with what modern players call a payout table (describing the value of different winning combinations) and the infamous lever on the side which set the reels in motion.

The first Liberty Bell game was placed in a San Francisco saloon; customers already familiar with the old five-reel poker games could ostensibly make the transition to Fey’s new game with ease, making San Francisco the perfect test market. The reaction must have been intense and immediate, because Charles Fey quit his job within two weeks of the first Liberty Bell so he could do nothing but make more games and expand the size of his business.

Just a decade later, a man named Stephen Mill came up with modifications for Fey’s design, becoming the first of many game designers that would, over the next century, constantly innovate the market and create the high-profit games found in casinos today. Mill added ten new symbols to each of Fey’s three reels, and the machine itself was made compact, portable, and simple to install. Eventually, Mill’s games (which went by various names) took over Fey’s market entirely, since they could be shipped and installed by a saloon owner (or any other businessman) in just a few minutes.

What Mill couldn’t do was make the machines cheat-proof. The heavy mechanical slots of the early 20th century were wide open to manipulation by gamblers. It didn’t take long for people to realize that they could stop the reels wherever they wanted by sliding a stick into the face and holding the symbol in place. Clearly, changes were needed if slots were going to continue to make money for their operators.

In 1964 the first machines with electronic micro-processor parts hit the market. These machines produced outcomes that depended on a computer brain rather than a physical mechanism. The idea was to make slots more secure, cheat-proof, and thus more profitable, but as an added bonus, the electro-mechanical machines of the 60s were designed to hold bigger amounts of money and pay out larger jackpots. 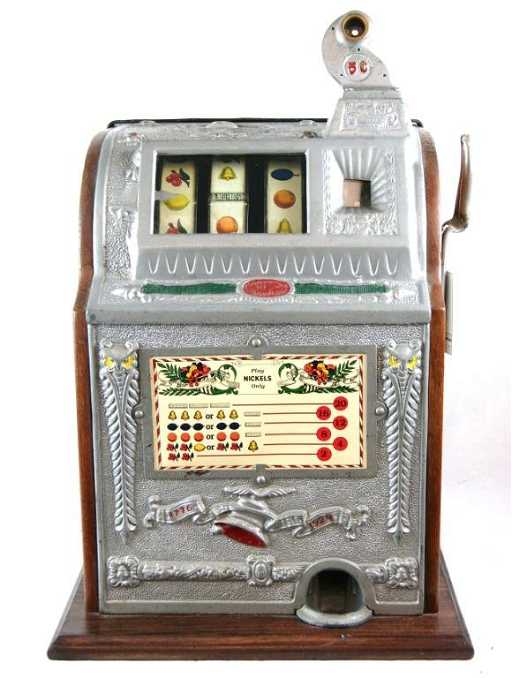 The next big innovation in slot design came a decade later – a man named Walt Freely decided to combine a television screen playing a simple video effect with a computer-controlled slot game. The first video slot was called Fortune Coin. As has happened time and again in the story of slots, the new video gimmick was paired with even more control for the game’s host in terms of odds, payouts, and security features.

At first, gamblers (who were used to seeing the actual spinning symbols, not a video representation of them) were slow to accept a screen in place of physical reels. Strangely enough, when Freely (and competitors) applied the same video model to poker machines, the result was an increase in the popularity of video slots. The theory is that if gamblers could trust video poker games, video slots must be trustworthy as well.

This little entertainment, with roots in mechanical poker games on the American frontier, is a multi-billion dollar industry more than a hundred years after it first appeared. Today’s machines have a seemingly infinite variety of reels, pay lines, symbols, jackpot sizes, and wager amounts. The popularity of video slots led to highly-stylized games produced for Internet casinos, and even real-money online slot play has evolved into a game you can play on your smart-phone or tablet.

Big changes in available technology over the past century are what made slots the money-maker they are today. Charles Fey and Stephen Mill may not recognize the latest licensed-character video bonus game hosted by an Internet casino, the highly-popular one-armed bandits they built in the late 19th and early 20th centuries share a direct lineage with modern games.

The Liberty Bell was the first variation of the modern mechanical slot machine we see today, originally being referred to as a 'fruit machine' or 'one-armed bandit'. Created in 1895 by Charles Fey (1862–1944), a car mechanic from San Francisco, the Liberty Bell's popularity set the standard for the modern slot machine; its three-reel model is still used today despite great advances in slot technology over the past several decades. The original Liberty Bell slot machine is currently on display at the Liberty Belle saloon in Reno, Nevada as a historic artifact.[1]

Each of Liberty Bell's three reels were imprinted with a symbol of a diamond, heart, spade, horseshoe, star and a cracked Liberty Bell. Once the player deposited a nickel, he could pull the lever on the side of the machine and the reels would begin to spin, stopping on any random combination of symbols. If the same symbol appeared on all three reels a bell would ring and the player would be awarded with coins. Three Liberty Bells offered the largest payout of fifty cents (10 nickels), which was ejected by the machine.[1]

The payouts for the Liberty Bell were as follows:

In 1907, with the growing popularity and demand for the Liberty Bell, the Mills Novelty Company began manufacturing the 'Mills Liberty Bell'.[2]

In 1910 the company introduced a slight variation of the Liberty Bell, called the Operator Bell. Changes such as a gooseneck coin acceptor and fruit symbols to replace the traditional images became a standard for slot machines for decades to come, and over 30,000 of these machines were produced. In 1915 the company then began manufacturing a less expensive version of the Operator Bell, replacing the heavy cast iron machines with ones made out of lighter wooden cabinets.[2]

In the early 1930s the Mills Novelty company made additional changes to their line of slot machines. First, they designed it so that their machines were much more quieter, which eventually gave the machines the name 'silent bells'. Secondly, they created a line of themed wooden cabinets each with its own unique design, the first being Lion Head released in 1931.[3]

It was this time in the 1930s that slot machines saw a rise of popularity in America. In the late 1940s Bugsy Siegel added slot machines to his Flamingo Hotel in Las Vegas, initially as a way to entertain the wives and girlfriends of high rollers. Soon the revenue generated from these machines matched those of the table games.[3]