The Best Starting Hands in Hold’em Let’s start by talking about the best starting hands, which are often referred to as ‘premium hands’. There is some disagreement amongst poker players as to which starting hands are the best, but few would dispute the value of the first of our three main groups, Aces and Kings.

One of hold’em’s most crucial decisions is, do I see the flop or don’t I see the flop? In this lesson we’ll examine the importance starting hand selection and what factors you need to consider before deciding whether to hold’em or fold’em. 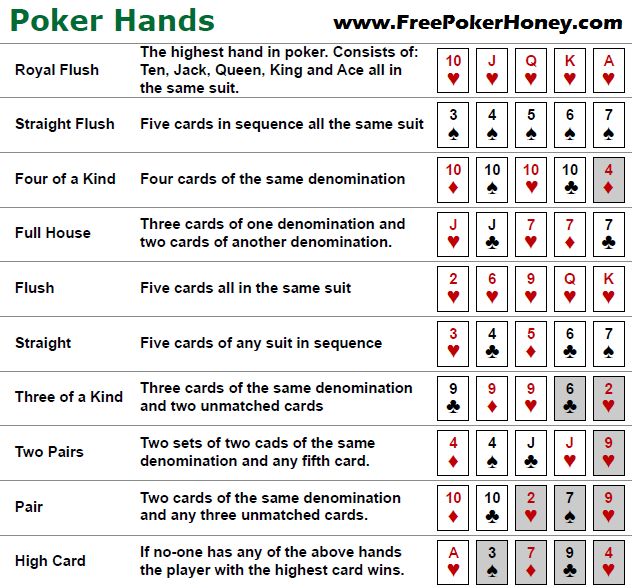 Unconnected cards might be one, two, three-gapped, or more. The bigger the gap, the less chance you have of hitting a straight. For example, if you hold 73, then you’d need a flop of 456 for the straight. But holding T8, you could flop a straight with 9JQ or 679.

The Best Starting Hands in Hold’em

Let’s start by talking about the best starting hands, which are often referred to as ‘premium hands’. There is some disagreement amongst poker players as to which starting hands are the best, but few would dispute the value of the first of our three main groups, Aces and Kings.

These two starting hands are the major players in hold’em. It’s not often you’ll get dealt Aces or Kings. In fact you get either Aces or Kings once in every 110 hands, so it’s not nearly as often as we’d like. Aces are by far the best possible starting hand in hold’em, closely followed by Kings. However, you should be aware that even Aces or Kings can get cracked, and they don’t play too well against multiple opponents. This means you should definitely be raising pre-flop to narrow the field. Extra caution is necessary when playing Kings, because if an Ace falls on the flop then you’re losing to anyone who has a single Ace in their starting hand. While they are very strong hands which most players love to get, they are certainly not unbeatable.

Queens and Jacks are great starting hands, and with either of these, you can usually be confident you have the best starting hand. Of course they are dominated by Aces and Kings, but they’re a favourite against all other starting hands. While Queens and Jacks will occasionally run into a player holding either Aces or Kings, it doesn’t happen too often. Play these cards strongly, and always look to raise with them.

Ace-King is known throughout the poker world as Big Slick, and when suited it’s often called Super Slick. While it isn’t a ‘made hand’, unlike a pair, it offers great potential. It’s only a big underdog to Aces and Kings, and even pairs like Queens and Jacks are only slight favourites. The beauty of AK (suited or unsuited), is that it dominates so many other hands like AQ, AJ, AT, and so on. These types of hands are the ones that players usually end up pushing all-in with late in a tournament.

This next group of starting hands is also a strong bunch. You should definitely be looking to raise pre-flop with any of these hands too. We’ve already talked about the power of AK, but starting hands like AQs, and AJs, are also very strong and often run into weaker Ace-X combinations. Even though these are all strong starting hands, and most of the time you’ll be winning pre-flop, you have to be careful – particularly a hand like KQs, which you can easily fold to a re-raise.

You’ll often hear novice players responding to questioning of why they played a particular starting hand with the line “well, because they were suited”. Some suited cards are worth playing and it’s certainly better to start with suited cards than unsuited cards. However, the odds of flopping a flush is 1 out of 118 hands (0.8%) with two suited cards, and you’ll only make a flush after the river around 6.5% of the time. Don’t fall into the trap of playing any two cards just because they happen to be suited – it doesn’t make a big enough difference to make junk hands valuable.

The word ‘kicker’ means the smaller of your two cards. Some players play a hand if it contains an Ace with any other card (such as an Ace with a 3 kicker), and this type of play ultimately cost players money and tournaments. For example, let’s suppose a player calls with A6 and the flop comes A83. What does the player do? bet? call? raise? call a big raise? go all-in? What if the flop comes Q63? The player has middle pair – which is very hard to play. Hey, the flop could come A6X – the player has two pair, Aces and sixes but this happens only 1 out of 49 hands (2%). Until you learn when and how to play Ace junk (AX) go slow with it. One good thing about A junk and K junk, is that you do not need to play these hands to learn when they may be profitable. Let experience from other hands and study be your teacher.

Hold’em starting hands can be a complex subject because every situation is different. If you were to ask a professional poker player, “should I call, raise, or fold this hand pre-flop?” his response would almost certainly be “it depends!” Here are some of the main reasons why it depends:

The Number of Players

Your position on the poker table will be a major factor in deciding which starting hands you should play. The later your position in the betting order, the better – because you get to decide what to do after most of your opponents have acted. We’ll talk much more about the importance of position throughout our lessons on Pokerology, but as a first step please see our lesson on the value of position. Playing position can elude us at first because it is a part of poker that lends itself to be exploited through experience. However, you must quickly realize that your position at the table should heavily influence the choice of starting hands that you play. Until a player has a feel or grasp for positional play, just believe and follow some of the suggestions on the subject.

Whether or not a pot has been raised should be a very important factor in your decision to play a particular starting hand. Your selection of starting hands should change when the pot has been raised by a reasonable player. If there has been a raise and a re-raise before you’re due to act, then you should only consider playing with a very strong hand. Of course this will also depend on the personality types of the other players and whether the game is very loose or passive.

When you first start playing poker it can be helpful to use a starting hand chart as a point of reference. We’ve created a couple of starting hand charts that can be used by beginners. Please click on the following links to view these charts (they will open in a new window):

Each of these charts loads as a PDF, meaning they be viewed on screen, bookmarked or better still, can be printed and studied offline.

Beginners can treat starting hand charts as the gospel, but once you know enough about the game to recognize appropriate opportunities, you can deviate because your adjustment may represent a more profitable play. Our starting hand charts are a guide, not a set of intractable rules. There is no such thing as a perfect starting hand chart, because every game is different and there are many variables at work. Game texture and table conditions can’t be measured and included into a neat formula.

There are many factors that may encourage you to tighten or loosen your play from our guidelines. If you have a starting hand that’s not listed on the chart, then there’s a good reason – it should almost always be mucked. But as in all poker decisions the phrase, “It depends” comes to mind. However, before you decide to deviate from our guidelines, have a reason for taking such an action.

Don’t fall into the trap of playing any two cards. Most poker players want to play hands and as a beginner it’s very easy to be seduced by suited cards or picture cards, or any two-card holding that contains an Ace of a King – but if you play hold’em correctly, you’re going to be selective and toss away the vast majority of hands you’re dealt.

When you gain more poker playing experience you can begin to open up your range of starting hands – but until then, proceed with caution and only play the best hands. Loose, promiscuous play will get you into trouble and is the downfall of many players.

In future lessons we’ll expand much more on the topics discussed in this poker lesson and get you to think beyond the actual cards you’re dealt. We also have hours of video footage covering starting hand selection for both no-limit and fixed-limit hold’em – so depending upon your preference, be sure to check them out!

David lives in Atlanta, Georgia, and has played over a million hands online and many thousands of hands in Mississippi, Louisiana, Florida, Illinois, Indiana, and Las Vegas casinos.