The Lord of the Rings video slot game presented by WMS Gaming is based on the epic book series by J.R.R Tolkien and the consequent movie adaptation by Peter Jackson. The video slot machine features popular characters from Peter Jackson’s movie series such as Frodo Baggins, Gollum, Gandalf the Grey, Aragon the Ranger, Legolas the Elf prince, Arwen (an elf and Aragon’s love interest), the Uruk-hai, and others.

The game is a penny slot machine and the minimum amount of money a player has to bet is 40 cents . Players travel through Middle Earth in an exciting storyline, all the while tackling villains and unlocking bonuses. Players can also choose from eight bonuses such as ‘Garden Heist’, ‘The Prancing Pony’, ‘The Balrog’, Isildur’s Sword, ‘Arwen’s Rescue’, ‘Galadriel’s Stairway’, ‘Gandalf’s Fireworks’, and ‘Uruk-hai Battle’.

The availability of the bonus depends on the number of miles the player has earned. In this game, a player’s progress can be saved. This helps collect the miles that unlock the bonuses

Lord Of The Rings online, free

The player has to trace his journey from Hobbitton to Bree, Weathertop, and the forests of Rivendel, enter into the goblin infested mines of Morea (where the player will face the ancient evil, the Balrog), climb into the tree tops of Lothlorien, protect the ring from the murderous Uruk-hai and more. The game has five power spin features and two mystery features.

Players must enter a user name when they begin playing. If they don’t, the first two bonuses are the only ones they will play. The game will tell players how many more miles they need to unlock a bonus game.

About the Lord of the Rings: Movie Series and Books

The Lord of the Rings is a fantasy novel written by J.R.R Tolkien. He intended the book to be a sequel to his earlier novel, ‘The Hobbit’ (The Hobbit explores the adventures of Gandalf the Wizard, the Hobbit Bilbo Baggins, and a band of Dwarves). The Lord of the Rings has sold over 150 million books worldwide, making it the third largest selling novel ever written.

The title of the novel actually refers to the main antagonist of the story – Sauron, from whom the ring was taken in a great war. Now he has returned in Mordor and is looking for the ring to help him conquer and rule Middle Earth (the setting for the books).

The book follows the adventures of Frodo Baggins, Bilbo Baggins’ nephew and heir, as he makes his way across the wasteland of Middle Earth into Mordor. He seeks to destroy the ring in the only place it can be undone, Mount Doom. Helping him in this task are fellow Hobbits: Samwise Gamgee, Merry, and Pippin, human allies: Galdalf the Grey, Aragon the Ranger, and Boromir, Legolas the elf, and Gimli, a dwarf warrior. The book is actually made up of three parts, The Fellowship of the Ring, the Two Towers, and the Return of the King, which have been made into motion pictures by Peter Jackson. The series has also been adapted for radio and theater.

The three movies won a total of 17 academy awards out of a total of 30 for which they were nominated. The last film, the Return of the King, won all of the 11 academy awards it was nominated for. Nine of the actors who portrayed the members of the Fellowship got commemorative tattoos, including the director Peter Jackson. The tattoo spells out nine in the Tengwar script. Only John Rhys Davies, who played Gimli, declined to get the tattoo and his stunt double got the tattoo instead. The three movies have earned in excess of $2.9 billion, while they were made with a budget of $ 285 million. 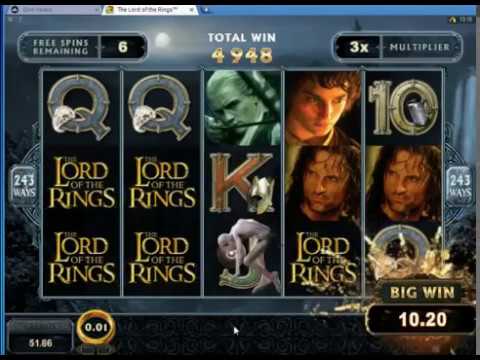 When the company first started, it began by making pinball machines. The company has its roots in the Williams Manufacturing Company that was founded in 1943.The owner of the company, Harry Williams, was trained in Stanford. His contribution to pinball machine gave the pinball machine a tilt mechanism which revolutionized the business.

The company released its first hit reel slot machine in 1996, called ‘Reel ‘em In’. Recently, the company has created video slot games for popular brands such as Men in Black, Powerball, Clint Eastwood, The Dukes of Hazard, The Wizard of Oz, Top Gun, Green Acres, Lord of the Rings, and more.

The company’s manufacturing and corporate offices are located in Waukegan, Illinois. The company also has development, sales, and distribution offices in countries such as Australia, Argentina, Mexico, United Kingdom, Austria, the Netherlands, Spain, Canada, India, South Africa, and China. Its business now includes the leasing, licensing, manufacture, sales, and distribution of its gaming machines.